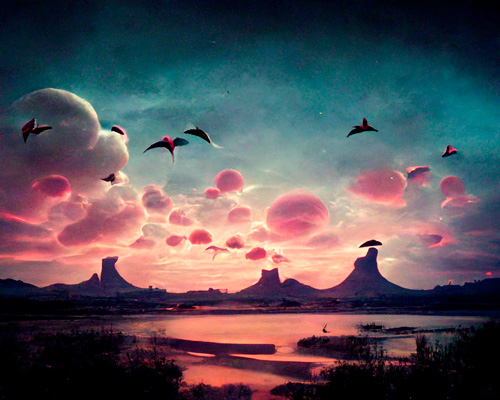 Yo, so I’m sure you’ve all heard the same ol’ story a million times. “AI can’t create original content, it just regurgitates information it’s been fed.” I mean, come on now. That’s like saying a baby can’t learn to walk without a push along walker. Give me a break.

Sure, if you feed an AI some garbage, it’ll spit out some garbage. But if you give it some quality prompts and let it do its thing, you might be surprised at what it can come up with.

I mean, have you guys seen those deepfake videos? That’s some seriously impressive stuff. And what about those AI-generated art pieces that have been selling for thousands of dollars? Don’t even get me started on the AI-composed music that’s been taking over the charts.

The truth is, AI has the capability to create some seriously dope content. It’s all about how you use it. Don’t be a Neo from “The Matrix” and just blindly accept what you’re told. Do your own research, play around with different prompts, and see what kind of magic you can create.

And hey, even if you don’t end up creating the next big thing, at least you tried. Because at the end of the day, that’s all that matters. Don’t let the haters bring you down. Keep on creating, keep on innovating. AI might just be the hero we need, y’all.

That’s exactly what we want to show you here today. So buckle up!

What is bad prompting?

Alright, so I know I dropped some truth bombs just before about how AI can create original content, but I also wanna touch on the importance of good prompting.

You see, bad prompting is like giving a kid a coloring book with a bunch of lines already drawn in. They might be able to fill in the colors and make it look pretty, but they’re not really creating anything original. On the other hand, good prompting is like giving a kid a blank canvas and a set of paints. They have the freedom to create whatever they want, and that’s where the magic happens.

So how do you make sure you’re giving your AI good prompts? It’s all about balance. You want to give it enough information to work with, but not so much that it’s just regurgitating what it’s been fed. It’s like that old saying, “Give a man a fish and you feed him for a day; teach a man to fish and you feed him for a lifetime.” You wanna teach your AI to fish, not just give it a fish.

Another important factor is diversity. If you only give your AI prompts from one specific topic or genre, it’s gonna have a limited perspective and it won’t be able to branch out into new and original ideas. Think about it like a well-rounded education. The more diverse your prompts, the more well-rounded your AI’s content will be.

So don’t be afraid to experiment and try new things. Who knows, you might just end up creating the next big thing. Just remember, as long as you’re giving your AI good prompts, it’s got the potential to create some seriously original content.

Alright, so I know I’ve been harping on about good prompting and how it can help your AI create some seriously original content, but I know you guys are probably wondering, “Okay, that’s all well and good, but what does a good prompt even look like?”

Well, let me give you a few examples.

First off, you can try giving your AI a specific topic and letting it run with it. For example, you could say, “Hey AI, I want you to write a story about a group of friends who go on a road trip and end up getting into all sorts of crazy adventures.” This gives the AI a clear direction, but also leaves plenty of room for it to be creative and come up with its own ideas.

Another option is to give your AI an original idea and some context and let it figure out the connections itself. For example, you could say, “Hey AI, I have this idea for a story about a young scientist who discovers a way to communicate with aliens. But, there’s a catch. The government wants to use this technology as a weapon. Can you help me flesh out this idea and see where it goes?” This gives the AI a bit more freedom to explore and come up with its own ideas, while still providing it with a clear starting point.

And finally, you can try giving your AI a completely open-ended prompt and seeing what it comes up with. For example, you could say, “Hey AI, I want you to write a story about something completely original and unexpected.” This can be a bit risky, as you don’t really know what you’re going to get, but it can also lead to some truly unique and unexpected results.

The bottom line is, there are all sorts of ways you can use prompts to help your AI create original content. It’s all about finding the right balance and being open to experimentation. So don’t be afraid to try out different approaches and see what works best for you. Who knows, you might just end up with the next big thing.

Don’t forget additives in your prompts

Okay, so I know I’ve been talking a lot about the importance of good prompting and how it can help your AI create some seriously original content, but there’s one more thing I wanna touch on: additives.

You see, when it comes to prompting your AI, it’s not just about giving it a topic or idea and letting it run with it. It’s also about adding in all sorts of little additives to help guide it in the right direction.

For example, let’s say you want your AI to write a story in the style of a fairytale. In this case, you might want to add in some specific frameworks or conventions that are commonly found in fairytales, like a prince rescuing a princess or a magical quest. This will give your AI a clear idea of what you’re looking for and help it create content that’s more in line with your desired style.

Or let’s say you want your AI to write a story with a specific tone, like dark and suspenseful. In this case, you might want to add in some specific ideas or themes that are commonly associated with this tone, like danger or mystery. This will help your AI understand what you’re looking for and create content that’s more in line with your desired tone.

The bottom line is, when it comes to prompting your AI, it’s important to think about all the little additives that can help guide it in the right direction. This might include things like content styles, specific frameworks, ideas, and other relevant additives. By adding in these little extras, you can help your AI create some truly original and targeted content. Just like the X-Men, don’t be afraid to tap into the full potential of your powers and create something truly special.

So I figured it’s about time I gave you guys a concrete example of what this looks like in action.

So let’s say you give your AI the following prompt: “Write a story about a group of birds who discover that the earth is flat and decide to prove it to the world.”

Now, on the surface, this might seem like a pretty straightforward prompt. But if you dig a little deeper, you’ll see that it’s actually full of contradictions and original ideas.

For starters, the idea of birds discovering that the earth is flat goes against our commonly held understanding of the world. We all know that the earth is round, right? So right off the bat, this prompt is forcing the AI to think outside the box and come up with a new perspective on things.

But it doesn’t stop there. The idea of birds trying to prove something to the world is also pretty original. I mean, sure, we’ve seen stories about animals solving problems or going on adventures before, but this one is a bit more unique. It’s not every day you see a group of birds trying to convince the world of something as crazy as the earth being flat.

So as you can see, even a seemingly simple prompt like this one can contain all sorts of original ideas and contradictions. And when you give your AI a prompt like this, it’s forced to come up with some pretty creative and unexpected solutions. Just like Doctor Strange, it has to use its powers of creativity and innovation to bend reality and make something truly unique.